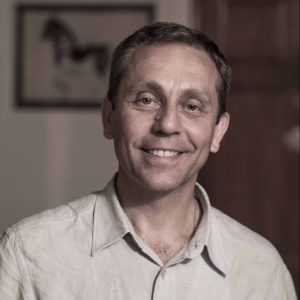 George Bebedelis was born in Athens, Greece, on April 30, 1962.
He has a Diploma in Mechanical Engineering from the National Technical University of Athens, a degree in Pedagogical Studies and a Master’s degree in History and Philosophy of Science from the National and Kapodistrian University of Athens. His dissertation was an in-depth analysis of Plotinus’ treatise On Beauty. George first came to Sathya Sai Baba in 1987 at the age of 25, inspired by His message of Universal Love and Truth. Since then, he has been an active member of the Greek Sathya Sai Organization (SSO). He has served as a Center leader, National Service Coordinator, National Education Coordinator, and currently serves as the National Council President of the Greek SSO. George has been a faculty member of the European Sathya Sai Education Institute (ESSE) since May 2000, and has participated in numerous training seminars in various European countries. He was a member of the Managing  Council of the Institute of Sathya Sai Education of South Europe (ISSE SE) from the date it was founded in 2009 to until 2014, and now serves as its Director. In addition, he teaches mechanical engineering in secondary vocational schools in Athens.